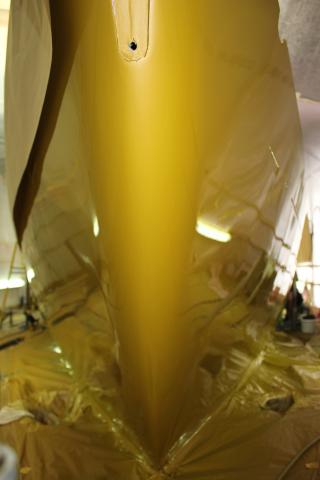 Falmouth Boat Co. has used a next generation paint system for the first time worldwide on Goldstar, a yacht set to compete in the Golden Globe Race 2018.

Goldstar is the new name for Vizcaya, the first Biscay 36 built by Falmouth Boat Co. As part of her current refit for the solo non-stop round the world race, the Flushing based boatyard has delivered a spectacular new finish in gold.

The metallic Awlcraft Solids and Effects base coat was finished with the next generation clear coat by AkzoNobel. This was the first time globally that the combination of the metallic base coat and the new clear coat have been applied by an applicator outside of the AkzoNobel paint facilities.

Goldstar’s owner Antoine Cousot said: “Falmouth Boat Co. has worked hard over the last year to refit the boat and it’s been tough because of the retro race rules. I’ve now got a great boat to race and she’s looking first class too. I’m looking forward to starting sea trials around Falmouth in early May.”

The Golden Globe Race is commemorating the 50th anniversary of Sir Robin Knox-Johnston’s major achievement in becoming the first to sail solo non-stop around the world.

Falmouth Boat Co. is currently refitting three boats for the race including another Biscay 36, E'le May.