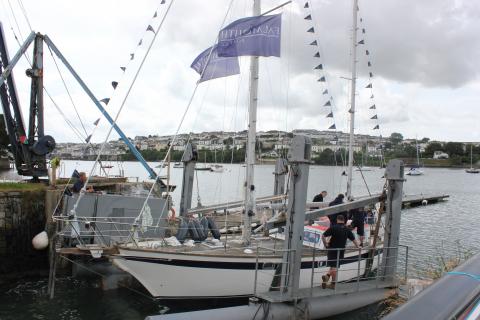 The second boat competing in the Golden Globe Race 2018 that Falmouth Boat Co. has refitted has been launched.

‘Maja’ is an Endurance 35 yacht that has had extensive work carried out to prepare her for the solo, non-stop circumnavigation. The race rules match those that Sir Robin Knox-Johnston had to comply with to win on ‘Suhaili’ 50 years ago.

Ian Reid, the owner of ‘Maja’, is both excited and apprehensive as the launch makes the gruelling challenge a reality.

He said: “Launching ‘Maja’ is a massive milestone. The hermit cell that I will be living in for 300 or more days has been six months in the making. The team at Falmouth Boat Co. has understood my thinking and have created, while possibly not the fastest boat, one of the safest boats in which to sail the unpredictable 30,000 mile voyage. The boat is man enough for the job, now it’s up to me.”

The ferocity of the Southern Ocean and the forces of nature that Ian will encounter throughout the race lead to Falmouth Boat Co. installing a collision bulkhead to prevent water intake in the event that ‘Maja’ hits a semi-submerged object as well as heavy duty storm boards to protect windows from damage.

Jonathan Fielding, managing director of Falmouth Boat Co., said: “The extensive strengthening of the superstructure, decks and windows, in particular, were challenging given the confines of the retro race rules. We have dedicated teams refitting each of the three boats we have competing in the Golden Globe Race and they have produced exceptionally skilled and creative work.”

Ian Reid said: “Following recent problems that yachts have encountered in strong winds and heavy seas, we are being as risk averse as possible. It is a race but you can only win it if you complete it. After all, the original race had but one finisher.”

Falmouth Boat Co. will support ‘Maja’ through her sea trials and is continuing to work on Antoine Cousot’s ‘Gold Star’ and Nabil Amra’s ‘E’le May’ which are both set to compete next year.

Read more about and see photos of Maja's refit here

Nov 01
How to make a distress call