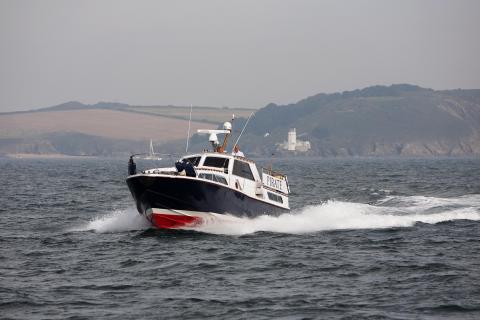 A classic offshore power cruiser built in 1974 and declared a loss five years ago is to motor from Falmouth to Jersey to star in the Jersey Boat Show.

Pirate comes from excellent racing stock, as her older sister Ocean Pirate came fourth in the Round Britain Race, but this is her first outing since a disastrous delivery to her new owner resulted in the engines catching fire.

The gentleman’s fast motor yacht was declared a loss but the new owner decided that she was worth restoring.

Five years later Falmouth Boat Co. have finished the restoration and Pirate is set to sail again. This included replacing her twin 300hp engines with a pair of Cummins 480hp engines which give Pirate a powerful cruising speed of 40 knots.

In addition, the Flushing boatyard installed new electric systems, rebuilt the aluminium hull, made extensive repairs throughout and restored the interior.

Jonathan Fielding, managing director of Falmouth Boat Co. said: “Successfully restoring a boat means that it is fully functional once again and as close to the original as modern materials and processes allow.  To restore a dilapidated craft like Pirate to its former glory for future generations to enjoy is an absolute joy.”

Mr Fielding will take around 10 hours to sail Pirate from Falmouth to Jersey in time for the boat show running from Saturday May 5 – Monday May 7. Pirate is set to be a star exhibit and hopes to attract a new owner keen to make the most of her power and racing pedigree.

Read more >
Aug 17
Small but mighty: Our launch in action

A great photo of our launch towing a yacht with The World behind.