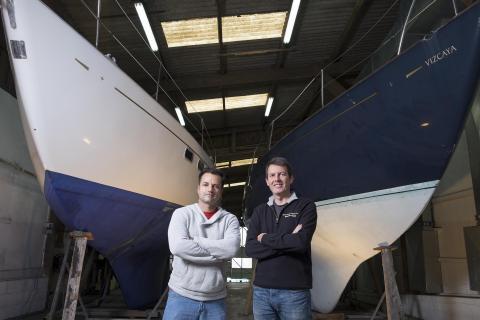 Two competitors in the 2018 Golden Globe solo non-stop round the world race have chosen Falmouth Boat Co. to refit their yachts – one of which was originally built at the Flushing boatyard.

The race will commemorate the 50th anniversary of Sir Robin Knox-Johnston’s major achievement in becoming the first to sail solo non-stop around the world. After leaving Falmouth in 1968 he returned 312 days later as the sole finisher in the original Sunday Times Golden Globe Race.

Falmouth Boat Co. built 29 of the traditional long keeled yachts from 1975 - 1990 and Antoine’s yacht was the first built.

Antoine said: “I looked around Falmouth Boat Co., met the staff and Jonathan and I was hooked. I just couldn't go anywhere else to get the vibes I was looking for. This race is special so I needed a very special yard and I am glad that I found it."

Antoine has bought Vizcaya, the first of these production yachts, launched in 1975, and Nabil has E'le May, built in Peterborough in 1990. Falmouth Boat Co. will extensively refit both yachts for the marathon ahead and relaunch them for May 2017.

Nabil said: “I hope to do Falmouth Boat Co.’s hard work proud with a competitive showing in the 2018 Golden Globe Race. I feel like I owe it to them after seeing how they are caring for me through this most difficult process.”

Jonathan Fielding, owner of Falmouth Boat Co. is delighted to welcome both yachts back. He said; “This yard has a natural affinity with the Golden Globe Race since it saw the build of several boats for the original event in 1968, including Vizcaya. The yard also hosted Sir Robin Knox-Johnston's yacht Suhaili on his return to Falmouth in 1969. We’re delighted that Antoine and Nabil have commissioned us to prepare their boats for this special race. With the boatyard steeped in so much history, it seems only right.”

This retro race is limited to production yachts between 32 and 36ft long, designed prior to 1988 with traditional long keels and stern hung rudders. The Biscay 36 fits the bill perfectly.