"You have no idea.. what it's like being alone": Golden Globe Race update 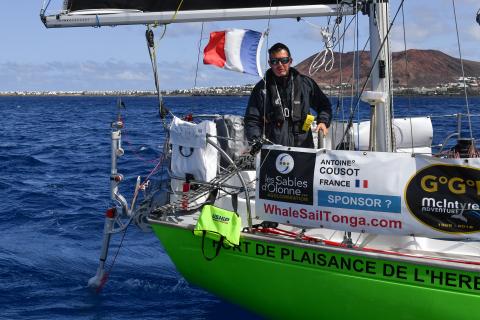 Symbiotically, one of the boats is a Biscay 36s originally built at our Little Falmouth Yacht Yard. Vizcaya was the first of the production yachts built here in a series of 29 from 1975 - 1990. Antoine Cousot bought the boat and asked FBC to refit her for the race.

He said: “I looked around Falmouth Boat Co., met the staff and Jonathan and I was hooked. I just couldn't go anywhere else to get the vibes I was looking for. This race is special so I needed a very special yard and I am glad that I found it."

Antoine has since renamed the boat Métier Intérim. Just two days ago Antoine stopped the circumnavigation to deal with issues on his WindPilot wind vane steering system. He stopped in Lanzarote on Sunday July 22 and stayed two days in port.

It became apparent in a candid interview that he his decision to drop down to the Chichester Class was as much mental as mechanical.

He told race organisers: "I needed the break just to relieve the pressure. It was important for me mentally to make sure that everything is working…And it was good to have a hamburger and a beer!

"This is a personal challenge – a huge adventure. You have no idea, even reading Moitessier’s book and those of other singlehanders, about what it is like being alone. They talk about the sea and the environment, but they don’t talk about what is going on inside.”

Race director Don McIntyre said: “At the end of the day, the wind vane issue was important, but Antoine had all the parts onboard and simply replaced a couple of bolts that had fallen out. No extra parts were brought onboard during his stay. There were also a few electrical issues, but this was more a decision by Antoine to stop, regroup and think about what is going on.”

Having addressed the problem, Antoine has resumed the race, now in the Chichester Class for those forced to make one stop during the race.

The other Biscay 36 that FBC refitted was E'le May, renamed Liberty II for the Golden Globe Race by Nabil Amra. Nabil reported on July 16 that a weld had broken on his Beaufort wind vane self steering and he was headed for the Canaries to attend to it. There he announced his decision not to continue the race.

As he battled his way across 35knot winds en-route to Tenerife, the Palestinian messaged: “Wind and waves in the teeth…Sailing is better with friends.” This was followed by: “Violently ill now...No sleep for 4 days.”

On reaching his USA home Nabil sent a message via Facebook: "Home and settling in, some long needed rest and recuperation! The boat performed admirably. It was a long, hard refit but the fellas at the Falmouth Boat Constuction Ltd did sterling work."

The third boat that FBC refitted for the race was an Endurance 35 called Maja. The race rules demanded that competitors have prior ocean sailing experience of at least 8000 miles and another 2000 miles solo, in any boat. Ian Reid sailed Maja solo to complete the requirement but on returning home, decided that sailing alone for the best part of a year was not for him, so he did not start the race.

We're pleased that Ian is going to race Maja in Europe later this year, we're proud of Nabil for achieving what he did and we're rooting for Antoine. Some fascinating stories are unfolding as the race continues - and we're only three weeks in!

Read more >
Aug 17
Small but mighty: Our launch in action

A great photo of our launch towing a yacht with The World behind.